The Royal Proclamation of 1763 is a foundational document in the ongoing relationship between the Indigenous Peoples of North America, the colonial powers (primarily Britain, France, and Spain), and the resultant colonial governments (Canada and the United States).

In short, the Proclamation by King George III divided up the Atlantic coast of North America into four new colonies (Quebec, East Florida, West Florida, and Grenada). It specifies the boundaries of these colonies and specifically sets aside the land west of the "Proclamation Line" to be for Indigenous Peoples. White settlers were not permitted to settle west of the line. It also specifies that land could only be purchased from the British Crown after it had been ceded by Indigenous nations. Indigenous people consider the Proclamation to be the first Aboriginal Charter of Rights because it so clearly specifies the same (Fenge & Aldrige, 2015). 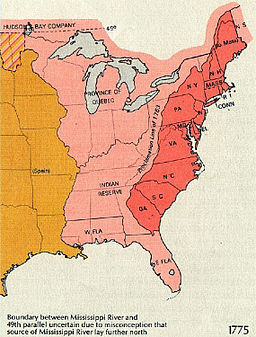